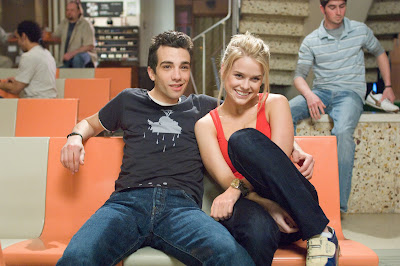 Maybe there's still hope for all of the single men in America (like myself) after all who don't want to suffer through a bad date with a bad romantic comedy! Kirk (Jay Baruchel, left), an average guy with a pretty average life, soaks up the moment with the beautiful Molly (Alice Eve, right) at a bowling alley in the (mostly) smart and funny romantic comedy SHE'S OUT OF MY LEAGUE.
Credit: Darren Michaels Copyright © 2010 DW STUDIOS L.L.C. All Rights Reserved.

THE PLOT: Oh, the average guy. He's the representative of the voting populace during election season, the quiet, good natured neighbor ... And in romantic comedies, the proverbial punching bag who never gets the girl. (I like to call it the John Hughes "Duckie" Memorial Award, save for the movie Weird Science. Moving on ...)

She's Out of My League stars Jay Baruchel as Kirk Kettner, an average 20-something year old guy working as a TSA agent at the Pittsburgh airport. He works at the airport with his friends, all of whom have their own distinct qualities. For while Jack (Mike Vogel) is as easy on the eyes as he is intellect (he's not that intellectual), Devon (Nate Torrence) is chubby, caring and quite possibly the nicest guy on the planet. And Stainer (T.J. Miller)? He's brash, outspoken, not afraid to call it like he thinks it is ... And more often than not, hilarious when he does.

Also part of the crew, unofficially, is Marni (Lindsay Sloane), a fellow airport worker who also just happens to be Kirk's ex and the new girlfriend of Ron (Hayes MacArthur). Marni gets along WAY too well with Kirk's family, hence the reason she and Ron are set to join them on their upcoming vacation to Branson, Missouri. And as you can imagine, that makes Kirk oh so happy ... Which is to say, not at all.

Kirk's luck takes a drastic change for the better, however, when fate brings Molly (Alice Eve) across his path. Heading out of town on a business trip, Molly ends up leaving her cell phone behind at airport security ... And Kirk answer the call literally when she cries out for help. Molly takes a shining to Kirk much to the disbelief of her friend Patty (Krysten Ritter), Kirk's brother Dylan (Kyle Bornheimer) or pretty much any one else that seems the two of them together.

But will their relationship last, especially with Molly's ex Cam (Geoff Stults) lurking about? Who knows - but Kirk knows one thing for certain: When it comes to Molly, she's (insert movie title) ...

THE TAKE: If you've seen the commercials/trailer for League, you're probably expecting the typical over-the-top, goofy rom-com where the guy ends up with the girl. Well, without ruining the movie for those of you planning to see it, if that's what you're expecting, you will be pleasantly surprised to discover that while the film does have its really goofy, over-the-top moments en route to the expected ending, it does so with a sense of charm, honesty (in regards to the world the characters live in and how people would react in the real world in the same situation) and good humor.

Of all the young actors currently taking turns in films that fit the "he's just an average, skinny young guy" cannon (which includes headliner Michael Cera and second in command Jessie Eisenberg), Jay Baruchel is the one that showcases the most potential as walking the line between average and leading man talent-wise. Able to be completely silly when necessary, he is also able to stand-up for himself and add a genuine depth to his characters well - and League finds him doing so the best in his still burgeoning career. Not be outdone, Eve does a great job as Molly. Instead of playing the character annonigly as a hot girl who doesn't know she's hot or worse yet, aloof and superficial, she excels at making Molly someone who truly understands the idea of beauty being in the eye of the beholder (or as the case may be, skin deep).

Then again, neither she nor Baruchel would be able to do so without the script of Sean Anders and John Morris, which - minus one flaw (to be discussed here shortly) - is honest, humorous and takes a sensible approach to each stage of the evolution of its main characters' relationship. The supporting cast - Miller especially, who strikes a great balanace between cocky and confident and sensitive as Stainer (yes, that name is explained in the film) - is great at providing humor and supporting Molly and Kirk (hence the term "supporting cast"); the sensible examination of the various aspects of dating and in this case, the pros and cons of dating someone out of their proverbial "league" (and what a "league" consists of if you think it exists) makes for quite and entertaining 90-plus minutes ...

... Save for one ridiculous speech at the film's required key conflict moment that threatens to nearly derail the film, that is.