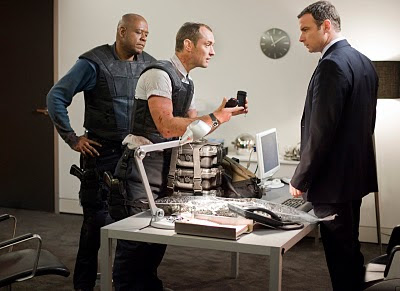 THE PLOT: Based on the novel The Repossession Mambo by Eric Garcia, Repo Men stars Jude Law as Remy, who, along with former childhood rival/fellow ex-soldier Jake (Forest Whitaker), works for an organization known only as "The Union." The Union sells artificial organs that work as well as if not better than the ones they replace ... Problem is, those organs come at a price - a very high price, which is why most of The Union's customers can't pay.

And if you can't pay, that's where Remy and Jake - a.k.a. two of The Union's top repossession artists - come into play.

Living by the mantra of "A job is a job," life is good for Jake and Remy, although the latter has a wife (Carice van Houten) who wants him to transition to a less dangerous desk job within the company. Life as they all know it, however, changes when Remy is sent to repossess the heart of famed music producer T-Bone (RZA).

That encounter results in a second life - pun intended - for Remy and the mysterious Beth (Alice Braga) - who has her own problems with The Union. And Remy's boss Frank (Liev Schreiber) is none too pleased about it.

In case you're wondering what the four aforementioned films have to do with one another, the answer is other than being quite popular among men ages 18-34 and being regarded by many as classics, not much. However, those are the films that came to mind at various points watching Repo Men - but make no mistake about it: Repo Men is an instant classic that has more than enough merit to stand on its own for years to come.

Repo Men has just about everything you could want in a sci-fi movie - unless you don't like blood or scenes of surgery. If you're expecting a calm movie in tune with Jude Law's past work, you'll be in for a shock to your system as Repo Men is to lighter fare like Alfie and I Heart Huckabees as Die Hard was to Blind Date was for Bruce Willis.

Law delivers a significantly strong performance that is both emotionally invested and physically vested, giving Remy both a sense of depth and, when nedeed, pure ass-kicking ability that makes for a great package as a whole. He not only drives the story forward via his character, but those of the surrounding characters as well. As hard as it may be to believe, this might be the best performance of Law's career ...

That's not to suggest Whitaker (who actually can be quite funny when not being forced to or forcing out bad jokes - see last week's post about Our Family Wedding for details) isn't quite good in his own right, as are Schreiber as the futuristic Lumbergh (Office Space reference!) and Braga as a woman who opens up a side of Remy that get the movie's second act going.

What really stands out about the film, however, is the keen direction by relative newcomer Miguel Sapochnik (IMDb his resume and you'll see what I mean). In combining kick-ass action sequences, emotionally strong character scenes and carefully peeling away the layers of the story like an orange rind, he helps craft Repo Men from run of the mill, brainless action movie into a deep, mind-bending sci-fi thriller with an ending that will keep audiences talking long after they leave the theater.

It's really hard to detail too much more of the movie without giving too much away, and trust me - this is a movie where you wait for the next twist and turn with baited breath. For that is a heavy component of the artistry of Repo Men; just when you think you know what's happening next, you, much like Remy, quickly learn you can't anticipate all of the film's events.

Take an intelligently crafted story, add a mix of heart-pumping action and a sprinkle of well conceived characters and what are you left with? A movie that is quite enjoyable - and if you disagree, I might have to come and repossess your ticket money myself.