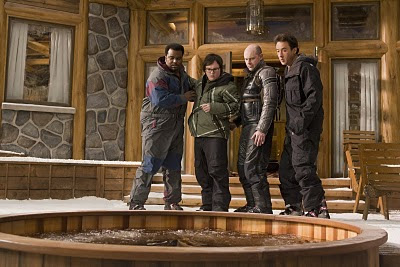 KEY CAST MEMBERS: John Cusack, Craig Robinson, Rob Corddry, Clarke Duke, Chevy Chase, Crispin Glover, Kellee Stewart, Lizzy Caplan ... And the actor who was once told to "Sweep the leg, Johnny!" (Trivia bonus points if you can tell me his name without Googling it first!)

THE PLOT: Adam (John Cusack) is not a happy guy these days. Dumped by his girlfriend, he's left to living alone ... Save for his nephew Jacob (Clark Duke) who hasn't done anything other than play video games in the basement of the house they now share. Meanwhile, Adam's buddy Lou (Rob Corddry) has his own problems - and they all begin and end with alcohol. At least Nick (Craig Robinson) is doing somewhat better, seeing how he's married and has a stable day job at an animal groomer (the name of which will please frat boys as it's a simple joke) ... Even though it can involve, well, rather nasty object retrieval.

After being unexpectedly reunited, the older friends (and Jacob, who they drag along for the ride) decide to take a much needed guys-only trip to a ski resort that was, as the young people say, on and poppin' in 1986. That's when the group decides to 'go crazy' and party in the hot tub outside their hotel room ...

The ensuing journey is one full of bad fashion, outdated technology ... And second chances they never expected to get.

The Good: For the most part, the movie is funny. The characters - Corddry steals the show in many scenes - are likable enough, the performances are relatively solid and there's a bonus factor that a lot of heterosexual men (or homosexual women) are likely going to appreciate and I'll leave it at that. It also brings back the musical scene to comedies ... And that's been missing since She's All That (that was a comedy, right?!)

The Bad: Too many bad body (and one animal) fluid jokes ... Bad male nudity (the average male physique vs. the average female physique is nowhere near as palatable upon repeated viewing) ... And the director/screenwriter really could have done a lot more to exploit the 80s to comedic effect other than a few simple cell phone/fashion and hair jokes.

The Silly: Pretty much all of Chevy Chase's involvement (his character doesn't add much at all and feels like an add-in since he was available) ... Did I mention the bodily fluid jokes? ... And Crispin Glover's character, but silly in a "It's good to see him working" kinda way.

Overall, Hot Tub Time Machine is the type of movie that's best seen as a matinee, watched ad nauseam on cable or when you can find it for $7.99 on sale used at Blockbuster Video. (I doubt there will be a Hollywood Video left in America when this movie hits the home market, sadly.) Whereas it's not funny on a first time you saw The Hangover, it's definitely as funny as Wedding Crashers upon repeating viewing. Likewise, while it lacks the heart of She's Out of My League, it's got more spirit going for it than say ... Oh I don't know, Our Family Wedding. It's almost as if someone wanted to make a modern Revenge of the Nerds (and YES, that almost happened in the last 6 years) or adult Superbad but wanted to be sentimental while keeping in a dash of Epic Movie/Harold & Kumar half-baked ideas and then had trouble figuring out how to make both elements work consistently.

But when the movie works, which it does more often than it doesn't, Hot Tub Time Machine feels worth the journey ... As long as you don't spend too much money to take it.

RATING* (OUT OF FOUR POSSIBLE BUCKETS OF POPCORN):

* EDITOR'S NOTE: This film would be a rating of 2 and a half buckets, but since I'm not making a new graphic for you people, let's just round it on up to three!