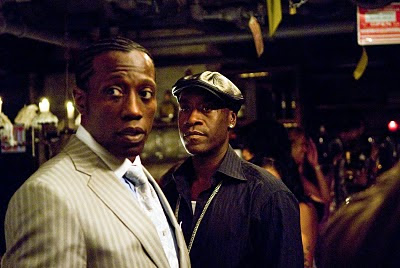 THE PLOT: Set in modern day New York City where everyone is looking to, for lack of a better hip-hop terminology, "get theirs"* Brooklyn's Finest focuses on the stories of three very different officers, each of whom has come to their own definition of "justice."

First up is Sal Procida (Ethan Hawke), a narcotics task force officer whose struggling to support his kids and wife (Lili Taylor), the latter of whom is pregnant (again!) with twins. Sal has his eyes on a better life for he and his family- even if his friend and fellow officer Ronny (Tony-award winning Irish actor Bryan F. O'Byrne) doesn't share the same mentality he does at times ...

Next up is Tango, a.k.a. Clarence Butler (Don Cheadle). Tango has been working undercover infliltrating the dope money-rich world of NYC's streets for a while in hopes of being promoted. But being as deep as he is in the scene has taken its toll on Tango, who does not wish to do the undercover dance (get it?) much longer. And once Tango's loyaties get tested by both Casnova Phillips (Wesley Snipes) - who saved his life in prison - and his superiors (Will Patton and Ellen Barkin), knowing where to turn and to whom is sticky to say the least ...

Last - and probably in his book, least - is Eddie Dugan (Richard Gere). A 20-plus year veteran of the force now just 1 week from retirement, Eddie is about as burnt out as one can be. Awaiting him in retirement is his much sought-after pension, plenty of fishing at his Conneticut cabin ... And plenty of time with his favorite female "companion" Chantel (Shannon Kane of All My Children fame). But once his department starts pairing him up with rookie officers like Eddie (Jesse Williams) they want him to mentor in the time he has left, Eddie doesn't think retirement can't get here fast enough ...

* The actual term is "get mines," but proper grammar will be used on this blog (for the most part)!

THE TAKE: You know, we've reached a point where I think we've seen just about every type of cop movie - from the fish out of water, goofball comedy (Corky Romano, Kindergarten Cop) comedy to the dramatic, bullets a-blazing (just about any action policed-themed movie since Dirty Harry in 1971. (And yes, the recently-released Cop Out is doing its best to revive the straight laced white guy, nutty black partner genre that's long been overdue of new life.) Throw in all the various police shows on TV ranging from scripted fare like the ubiquitous Law & Order franchise to reality fare like The First 48 and it's hard to see a movie that breaks new ground in a very well-worn genre.

Brooklyn's Finest is not going to do anything in regards to re-inventing the cop movie drama wheel. What it does do, however, is deliver enough entertainment to justify your ticket money thaks to the well-paced camera work of director Antoine Fuqua and the understated acting of Gere and Snipes coupled with Cheadle's and O'Byrne's empassioned performances. (Hawke is fine, but he's basically playing Denzel Washington's role in Training Day in this movie and that becomes painfully obvious early on in the film.)

Let's be honest - the themes at the heart of the film (loyal, how one may use the aforementioned mentality of a trying to achieve a good end justifying the horrific/immoral means, loyalty, who the real criminals are, racial tension between blacks and police, etc.) - are not new and no new ground is broken here at all. Thankfully, the aforementioned cast and crew make you care enough about their respective characters and what happens to them via proper framing (a strong use of music, cinematography and dialogue realistic for both the situation and the character).

Long story short, the cast and crew make the film the cinematic equivalent of a steak at a backyard barbecue vs. one at a four-star steakhouse: If you've eaten meat, you know what a steak, in general, tastes like. But when you have a noted chef (or in this case, several), it's going to seem like it tastes better than the one you make, even if the quality is closer in the final cut than you might think.

And that should keep audiences from having a beef (oh, puns!) with Brooklyn's Finest.

RATING* (OUT OF FOUR POSSIBLE BUCKETS OF POPCORN):

* EDITOR'S NOTE: This film would be a rating of 2 and a half buckets, but since I'm not making a new graphic for you people, let's just round it on up to three!