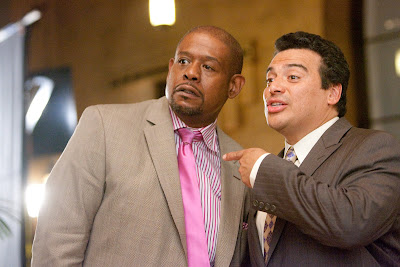 When you think comedy, you think Forest Whitaker and Carlos Mencia ... And then you realize you are insane - or at least crazy enough to have hope heading into OUR FAMILY WEDDING.
Credit: Scott Garfield/Fox Searchlight

THE PLOT: As opposed to going into a great amount of detail, here's the basics of Our Family Wedding. Boy (Lance Gross) and girl (America Ferrara) are going to get married. Problem: His dad (Forest Whitaker), her parents (Carlos Mencia and Diana Maria Riva), her sister (Anjelah Johnson) and traditional Catholic grandmother (Lupe Ontiveras) haven't met each other. Oh yeah, there's one more problem: The boy is black; the girl is Hispanic.

Let the comedy ensue when these cultures clash!

THE TAKE: "Forest Whitaker and Carlos Mencia? That's comedy gold!" - If you've never said that sentence to anyone (or yourself), guess what? Guess Who's Coming to Din-, I mean Guess Who?, I mean Our Family Wedding isn't going to make you, either.

Are there some funny parts in Our Family Wedding? Yes. Are they worth paying to see this movie in a theater? No. Does Carlos Mencia turn in a surprisingly decent performance that might make you think he would better served sticking to movies, possibly dramas than the terrible existence that was Mind of Mencia and Anjelah Johnson provide enough comic relief to make you forget those last few terrible seasons of MADTv she was part of? Yes. Does Forest Whitaker need to make more comedies? Hell no! Does America Ferrara seem to have a career in movies? Maybe. How about Lance Gross? Who knows - but when you're billed fifth in a movie where YOU ARE ONE OF THE TWO CENTRAL CHARACTERS, it doesn't look good. (if there's one thing I can say for this movie, it's never, EVER deprive an audience of Charlie Murphy - did we learn nothing from the misuse of Katt Williams in First Sunday?!)

And when one of your biggest gags in your movie involves a goat ingesting Forest Whitaker's Viagra (there's a thin line between hilarious and silly, and trust me, this movie crosses it several times), it shouldn't take much to see why Our Family Wedding doesn't make for good viewing as a whole. Whereas the majority of the racial humor is pretty tired, the dramatic parts feel a bit too forced at times to be taken seriously consistently.

It's one thing for a movie to be silly and funny; but when it's just silly without any real thought or effort behind it, you should consider divorcing yourself from it at any cost possible.