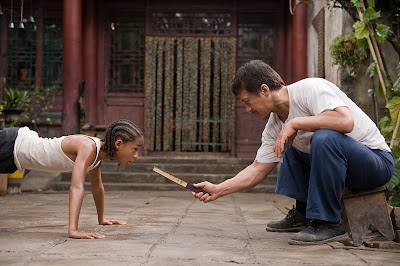 THE PLOT: Taking the beloved classic of the same name starring Ralph Macchio, Noriyuki “Pat” Morita and perennial 80s villian Billy Zabka, the 2010 version of The Karate Kid stars Will Smith's son Jaden as Dre Parker. Living in modern-day Detroit, Dre finds his world turned upside down - literally - when his mother (Taraji P. Henson) gets transferred to China. (Get the world upside down joke? No, OK ... Moving on ...)

As you might expect for an urban youth with cornrows living in a country where he doesn't speak the language, Dre is not looking too forward to being in China - until he and his newfound fellow American friend Harry (Luke Carberry) spot the smiling Mei Ying (Wenwen Han) alone on a nearby park bench. Dre is having a good time talking to the girl (who fortunately for Dre speaks English better than he does Chinese) until another boy - a family friend named Cheng (Zhenwei Wang) - steps in and starts chastising the musical prodigy for wasting time talking to Dre instead of practicing.

While Dre is reluctant to tell his mother or school principal (Ji Wang) what's bothering him, someone else eventually figures out what is - that man being Mr. Han (Jackie Chan), the maintenance man of the building where he lives. Quiet and non-talkative, Han ends up taking up Dre's cause to stop Cheng and his friends - all of whom are kung fu students at a dojo run by the stern Master Li (Rongguang Yu) - from using him as their own personal punching bag.

There's just one catch - Dre is going to have to fight them at an upcoming tournament ... Whether or not he is up for the challenge of his young life remains to be seen.

THE TAKE: Whether or not you'll like this version of The Karate Kid or the original is like debating which soda is better, Coke or Pepsi. It's an eternal debate that will rage on that some will feel passionate about for one product versus the other, but in the end arriving at the same final analysis: Both are sodas; which one is better is a matter of personal preference.

If you saw the remake of The Day the Earth Stood Still with Keanu Reeves, you also saw a child actor who was quite possibly the worst part of a film many didn't enjoy overall ... I am happy to report that while his acting is still nowhere near the caliber of his father or his peers his own age, young Jaden is making strides to rectify that as best he can. Sure, his dialogue delivery is lacking and surprisingly, he lacks his daddy's natural charm (which is his biggest asset), you can see he is improving in those areas, which helps.

Jaden's athleticism, however, cannot be questioned - and that's good given the amount of stuntwork he does on his own. The karate sequences in turn are MUCH better than those of the original film, which adds a great deal to the modern version as a visual experience. That helps to offset the paint-by-numbers feel of the film's story (I mean, you KNOW what's gonna happen and many of the scenes/plot development turns are standard fodder now as much as they were in the 80s).

The person who really makes this version of the film worthwhile, however, is Chan. For as much as he's known for his comedic roles in films such as the Rush Hour series or ill-fated ventures like The Tuxedo, he is better known for martial arts abilities. While the latter is on display a great deal in the film (including its best kung-fu sequence ... Is it weird to anyone else they kept focusing on kung-fu in "The Karate Kid?!"), that's not what makes the film work. It's Chan's heart against the backdrop of China.

While the country is used well as a character to visually entice you and make you explore the world fish-outta-water as Dre does, it is Chan's emotional layering of Mr. Han that provides the heart to the entire experience. You want Dre to do well because of what it will mean in terms of Han's existence, a point which is at the center of the film's most poignant and genuine moment.

For while the film may be about the karate kid in theory, it's really about relationships and overcoming challenge - and that is something that will speak to the kid in all of us, no matter how young or old you may be.