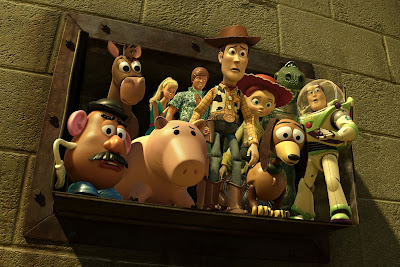 THE PLOT: A film that picks up essentially where it would in the real world (the last film being released in 1999), Toy Story 3 re-introduces us to our familiar gang of friendly fun faces in the form of Woody (voiced by Tom Hanks), Buzz Lightyear (Tim Allen), Jesse (Joan Cusack), Ham (John Ratzenberger), Mr. & Mrs. Potato Head (Don Rickles and Estelle Harris, respectively), Rex (Wallace Shawn) and Barbie (Jodi Benson). And much like their legions of fans, the toys owner Andy (John Morris) has grown up. In fact, he's now a 17 year-old getting ready to head to college.

While Woody seemingly lucks out as Andy just can't seem to leave him behind, the rest of the gang is heading to the attic ... Or so they think. For due to an unfortunate mix-up, Woody and company end up at Sunnyside, a neighborhood day care center where they will be played with endlessly by young children who will love them for ever and ever.

Unfortunately, not everything is bright in Sunnyside. For some of the children play rough - very rough - and that's not good for Woody and the gang, who get stuck in the room with the rough and tumble toddlers. But there's a bigger problem looming ... Lots'O Hugging Bear (Ned Beatty), Sunnyside's iron pawed ruler.

So what will become of our favorite plastic and stuffed playthings? Only Pixar knows!

THE TAKE: I can count the number of less than excellent films Pixar has released on one finger - Cars - and there are plenty of people (mostly those not old enough to have a driver's license ironically enough) who like that movie more than yours truly. Why do I bring that up? Because with Toy Story 3, the company proves not only is there life in this franchise, but that they are quite possibly the best studio making films today - and I mean that.

When you make a sequel, the common practice is seemingly to take everything that worked before and just make it blow it out more. But if the Shrek franchise has proven anything over than it can still make a buck, it's that bigger isn't always better when you lose the heart of what made you so enjoyable in the first place - especially if you fail to break any new ground and expand the story. Toy Story 3, however, not only is bigger with its 3D element, it may be better than Toy Story 2 as it examines new nuances with the characters (aging, the need to be needed, family, connections, the joy of being a child) without ever being heavy-handed, sappy and most importantly, corny.

The humor is great, particularly Michael Keaton as Ken, Barbie's new would-be suitor (the character serving as a great way to add to a movie without doing too much), the story progresses as just the right pace and the journey to the film's apex is an enjoyable ride with twists, turns and well rounded characters you root for and/or against better than some films starring real people.

But if you enjoy real (or "reel," if you prefer) entertainment that's family-friendly, funny and heartwarming, Toy Story 3 is a film you can play with over and over again.