MOVIE OF THE WEEK #2: SPLICE 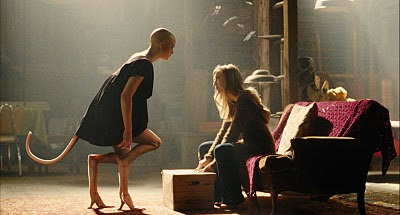 THE PLOT: A film that will cause thousands (or, if they're really lucky, perhaps millions) to have an OMG moment, Splice stars the "Where have you been? You're usually great!" Sarah Polley and Adrien "don't call me The Pianist!" Brody as Elsa and Clive, a pair of romantically involved genetic engineers working on top secret projects for a company. (The company's name is not important.)

Long story short, they think they are on the verge of a medical breakthrough when they create a new species whose DNA could be used to fix many diseases across mankind. There's only one catch - their company is in make-or-break mode and Clive and Elsa are being instructed to move on to the next phase of their project. Elsa (who has a bit of an issue with children and the idea of motherhood), however, has her own thoughts on the matter, which is why she takes her life (literally) into her own hands and splices (hence the film's title) a sample of human DNA with that of an animal.

What results is Dren (portrayed by Abigail Chu and later Delphine Chanéac) ... You probably think you can imagine what happens next, but trust me, you have no idea ...

THE TAKE: Here's a couple things about Splice I need to say up front. This movie is not entertaining because it features great acting; in all honesty, the performances are average at best and not the thing that makes the movie memorable. Second, the special effects aren't that great, either. As a young lady I ended up chatting with after the screening pointed out, "Fred" and "Ginger" look like that nasty worm things from Starship Troopers - and that came out back when I was still in college in the late 90s (Man, I'm getting old)! And no, this movie is not entertaining for it's story (it's pretty basic - you mess around with DNA, it doesn't always go so well) ...

No, this film - which may end up becoming a cult classic on DVD is entertaining for three reasons: [1] Polley and Brody deliver classic, 'Let's act like stereotypical, too-oblivious-to-the-obvious-despite-supposedly-being-geniuses white people in a sci-fi/horror movie' performances; [2] the overall campiness that stupidity helps create and [3] two scenes that, despite my distaste of the term (both for its overuse and 10 Commandments-breaking nature) that are GUARANTEED to draw a reaction out of you! While one scene is unnerving, the other preceding it - you'll know what I mean if you see the movie! - is just so wrong you will be talking about it for days after the movie.

Much like 2007's adaptation of Stephen King's novel The Mist, Splice goes from being a bad movie to a goofy B-movie to a movie at the end you'll find yourself surprisingly enjoying more than you did. And if you can see it with an audience that feels like chatting, that might make it all the better as this is one time crowd participation might actually enhance what you're watching on screen (within reason!).

And when a movie has two scenes that can draw that type of reaction out of you, it's going to get at least two buckets of popcorn on the McCoy on Movies scale!