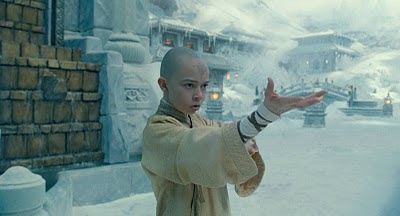 Now that martial arts is back in vogue on the big screen, is it only a matter of time before they remake The Last Dragon with Charlie Murphy in the role of Sho'Nuff?! Aang (Noah Ringer) gets ready to bring the pain as the title character in director M. Night Shymalan's THE LAST AIRBENDER.
Credit: Industrial Light & Magic / Paramount. © 2010 Paramount Pictures Corporation. All Rights Reserved.

THE PLOT: Based on the Nickelodeon cartoon of the same name, The Last Airbender begins by introducing us to Katara (Nicola Peltz) and Sokka (Jackson Rathbone), a pair of teens living in the Southern Water Tribe. You see, in this world, there are four types of tribes (or societies, if you will) based on the elements of fire, water, earth and wind. Katara and Sokka live in the Southern Water Tribe, one of several nations fearful of the Fire Nation led by Fire Lord Ozai (Cliff Curtis). Ozai is determined to make the Fire Nation the greatest empire in the land with help from his right hand man, Admiral Zhao (Aasif Mandvi).

Not joining Ozai, however, in his quest to take over is Prince Zuko (Dev Patel), his disgraced son who has been banished from the Fire Nation for violating his father's wishes. He is now on a quest with his Uncle Iroh (Shaun Toub) to capture the Avatar and regain his pride in the process.

What or who is the Avatar, you ask? He is Aang (Noah Ringer), the last member of his tribe of Airbenders who can manipulate the wind with great, drastic effects. The Avatar can also manipulate (or "bend") the other remaining elements with training and is obligated to use his powers to maintain peace in the physical world over all the tribes. But upon learning he could never have a family, Aang ran away from his duties and training to become the Avatar, leading to the Fire Nation's rise in the first place.

So what happens when Katara and Sokka free him from the icy depths of their region so he can reclaim his rightful place in the world and take on the fire nation before they can try and do more harm? You'll have to watch M. Night Shyamalan's big comeback film to find out!

THE TAKE: "The sum of the whole is greater than the individual parts" - I don't remember where I learned that, what subject (I believe it was math) it was suppose to apply to ... What I can tell you, however, is why it's relevant to The Last Airbender: For while the individual parts of the film aren't great on their own, they collectively add up to a film that is better than it is not.

Airbender could be subtitled "A Tale of Two Hours." For the first hour of the film struggles to find its legs due to a mix of weak acting, mediocre action and dialogue, the second hour rectifies these problems very well. Just like the recently released Robin Hood, you'll find yourself somewhat bored by the first half of the film, but if you can stick it out all the way through, you will be rewarded with a film that is more filling than you first suspected it would be.

To use another analogy, The Last Airbender is like a boxer who comes in with a championship pedigree, slacks off for a couple rounds, almost gets knocked out and then charges back to defend its title. Sure, the film has a built in fan base given the success of the TV series on which it is based and appeals well to children, but until the film picks things up, the first hour is straight-up dull. Luckily, the second half corrects the problem (I don't know how many ways I can say the same thing) and makes it worthwhile while setting up the sequel(s).

While Shyamalan has been largely to blame for the failure for his last couple of pictures seeing how he created, directed and ultimately wriggled every ounce of control over them, Airbender does much to re-establish him as visual auteur. Sure, the film is not perfect, but it's FAR more engaging than his last couple of works in all aspects - and that is the best news anyone who remembers paying to sit through the torture of The Village or The Happening as I did.

So, much like its director, Airbender proves it can be worthy of your time; what the future holds for both, however, remains to be seen.