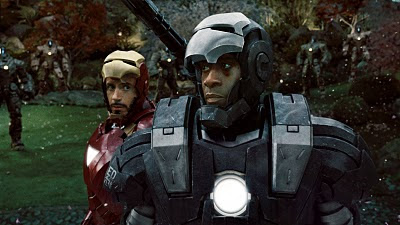 WRITER: Justin Theroux (screenplay), Stan Lee (comic book upon which the films are based)

THE PLOT: Picking up 6 months after the events depicted in the original $300 million-plus box office smash released back in 2008, Iron Man 2 finds billionaire reformed weapons manufacturer Tony Stark (Robert Downey, Jr.) enjoying all of the fame and fortune that comes with also being Iron Man, a.k.a. the force that (in his mind, anyway) has brought world peace. Unfortunately for Tony, the U.S. Government - led by the aptly named Senator Stern (Garry Shandling) - wants the "weapon" that is Iron Man in their property. Weapon maker Justin Hammer (Sam Rockwell), who has picked up Tony's old contract with the government, would like his would-be rival out of the picture completely. And keeping both the government and Tony happy means loads of trouble for James "Rhodey" Rhodes (now played by Don Cheadle after Terrence Howard got the boot for the sequel).

While Tony is all too pleased to let his right hand woman Pepper Potts (Gwyneth Paltrow), personal driver Happy Hogan (Jon Favreau) and new legal assistant, the mysterious and alluring Natalie Rushman (Scarlett Johansson) take care of all the business affairs, there is a personal matter he is keeping all to himself: The toxicity of his blood caused by the palladium source in his chest, for the very thing that is keeping him alive is also killing him. (Such a tragic catch-22, isn't it?)

But there's something - or someone, rather - that's also got their eyes on killing Tony. That would be Ivan Vanko (Mickey Rourke), son of Anton Vanko - a former Russian technology expert who defected to the U.S. only to work under Tony's father (got all that?). Seems like one son's father wasn't quite so good to the other son's father and because of that, one son is ready to make the other son pay for his father's misdeeds...

So the question remains: Can Iron Man save the world again? Maybe - but only if Tony Stark is able to first save himself?

THE TAKE: The first Iron Man felt special for several reasons. One, few people, if any outside of the studio had many expectations for the film given his "lower stature" (quote marks used as that is debatable among longstanding fans of Stan Lee's Batman-like millionaire hero) in the comic book canon. Two, Robert Downey, Jr. was still in the "respected but not a megastar" stage of his career comeback and three, it was the first film in the series, so no one had a firm idea of what the cast and crew were going to give them.

Fast forward 2 years and $318 million-plus domestic box office later, and Iron Man 2 has a lot of challenges facing it. For as The Dark Knight proved, if you do it right, the superhero sequel can be big business both critically and financially. So how does 2 stack up to the original? Well enough, even if a bit of the magic from the first is lacking for all of the aforementioned reasons.

Downey is his usual solid self back in the role of Stark, slightly expanding upon the characteristics (both positive and negative) that make Tony Stark more than just a Bruce Wayne clone. Paltrow (who I admittedly have never been much of a fan of) does a great job (I was going to redeem myself) as Pepper, the always frazzled woman who is also the only one who can reel Tony in temporarily when he gets ahead of himself.

Likewise, Cheadle will have many fans saying "Terrence who?" with his turn as Rhodes while Rourke is equally solid as Vanko, although he almost feels a bit hamstrung by certain elements of the "we have to make this a bigger situation" storyline penned by Theroux. You get just enough of Vanko to make you realize why he's doing what he's doing, but you never get the full sense of what he might do and what he might want to do beyond destroying Tony (i.e. what might be his next big move) that would further enhance his character. While Rourke has gone on record with Entertainment Weekly recently as saying he wanted to "humanize" Vanko, he (and the film) may have been better served going the Heath Ledger-route and removing all human elements from his character.

The big winner performance wise is the under-appreciated Rockwell, who as Hammer (who is basically a non-competent, anti-Tony Stark who desperately wants to be him). For while his character is a pretty stock one in movies and comic books, Rockwell's performance adds a great comedic element to the film. Johansson is also worth mentioning in her role as she does something that is often tricky for female characters in testosterone-driven cinema: Play a character with sly sense of sexiness that is also convincing as a strong, believable ass-kicker without giving in to either extreme.

The film's flaws/problems/concerns (use whatever word you choose) notwithstanding, 2 delivers more often than not on what it intends: A fun 2 hour-romp with lively characters and intriguing action sequences that also helps further establish The Avengers (comic book fans will know what this means; if you don't, hit up the Marvel Universe Web site now and get to reading!) movie down the line. Sure, some of the action

To quote Clark Gregg's Agent Coulson character says at the very end of the film "I think we found it" - "it" being the first hit movie of the summer.