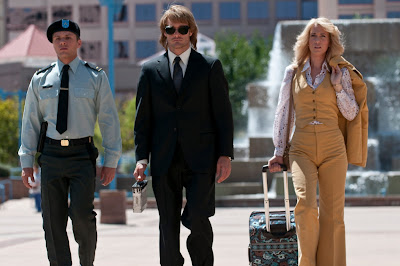 Are you ready for something you can't admit to your friends and family you saw and - gasp! - possibly enjoyed on a guilty pleasure level? Well then, you better get ready for Lt. Dixon Piper (Ryan Phillippe), titular character MacGruber Will Forte) and Vicki St. Elmo (Kristen Wiig) in a film that will kill brain cells and maybe even make you laugh, MACGRUBER.
Credit: Greg Peters/Rogue Pictures

THE PLOT: Based on the Saturday Night Live sketch parodying the old TV action drama MacGyver that aired from 1985-1992, MacGruber stars Will Forte in the title role. Whereas MacGyver (Richard Dean Anderson) was a military dynamo that refused to carry a gun and could make a gadget out of anything it seemed to save the day, MacGruber is an idiot - a well intentioned idiot, but an idiot nonetheless.

Now living a quiet life in retirement following the death of his wife (Maya Rudolph), MacGruber finds himself called back into when Colonel Faith (Powers Boothe) comes looking for him to stop the evil Dieter Von Cunth (Val Kilmer - re-read his character's last name carefully; it's a MAJOR attempted point of humor throughout the film), a hired gun who has a deep-seeded and long-standing rivalry with our would-be hero. But true to soldier of fortune form, MacGruber is ready to take down Von Cunth at all costs, needing only his team of Vickie St. Elmo (Kristen Wiig) and young upstart Lt. Dixon Piper (Ryan Phillippe) at his side to back him up.

So can MacGruber save the world ... Or will he need someone to save him from himself (and another mediocre SNL sketch-based movie)? Only time will tell!

THE TAKE: This is downright silly and a classic some will really like (The Ladies Man) and some will hate it (It's Pat: The Movie) that is not going to reach other classic Saturday Night Live sketch-turned-movie status (Wayne's World) that is funnier than most of the films in the show's cannon.

If you need more of an analysis than that, you're in luck - I do have one for you. However, the following sentences will only serve to try, most likely in vain, why while Macgruber is not a good film, it is a good film. It's the classic "So-bad-it's-good-in-a-kind-of-way" film, yet one that you rightfully should be subject to ridicule for if you announce to anyone you plan on seeing it on purpose in a theater, especially if it's not the matinee show. Why is that so, you wonder? Well, I'm glad you hypothetically asked!

Acting-wise, Phillippe is good in his role, as is Wiig also has her moments in the film's straight (wo)man role, leaving the heavy lifting to Forte throughout much of the film's 99 minutes (including credits!) Kilmer, however, comes off as the film's best presence, as he plays Dieter with the right amount of villiany, sarcasm and humor needed to make his character work as well as it does.

The humor, however, is another issue altogether.

The humor in MacGruber consists of about five things - [1] The title character's tendency for being absolutely clueless; [2] His tendency to curse in creatively vulgar ways - which leads to [3] The REPEATED gratuitous mention of Val Kilmer's character's name in any and all ways possible; [4] What most would be consider twisted (or at least somewhat inappropriate) sexual behavior and [5] blowing jokes pertaining to MacGruber's lack of hipness when he really thinks he's stylin' (no "g" for that one, grammar police).

That being said, are there some truly laugh out loud (LOL for the text generation) moments in the film? Without a doubt, especially when the film sticks to tactics no. 1 and no. 4 as listed above. Are there some moments that are straight-up nails on a chalkboard, kick you in the groin, gut-wrenchingly bad? Yup - see points 2, 3, (sometimes 4) and 5. Is it worth seeing? That depends - I got to see it for free, so other than the gas I burned up en route to the theater and food I didn't purchase at the concession stand, it delivered on what I ended up paying for it. If I rented it on DVD, I would be fine with it, too, most likely as I would if I caught it on cable.

I guess the best way to sum it up is enjoying MacGruber depends on what it's worth to you to sit through it - and while that is not a glowing endorsement, it's the most honest one I can give. If nothing else, it should bring about the end of the sketches that have definitely run their course and get poor Ryan Phillippe (admit it - when you saw he was in this you got a little sad inside just based on principle) another paycheck.

Now, whether or not you want to contribute to that paycheck is up to you. Just ask yourself what would your inner MacGruber do ... And if you think you have one inside you, then you should already know the answer.