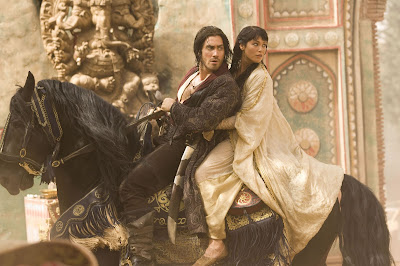 THE PLOT: Inspired by the long running video game series of the same name, Prince of Persia: The Sands of Time stars the seemingly unlikely Jake Gyllenhaal in the title role as Prince Dastan. An orphan as a youth, Dastan is adopted into royalty by King Sharaman (Ronald Pickup) after impressing him in an impromptu moment in time.

Fast-forward 15 years later and the Persian kingdom is stronger than ever under Sharaman's rule. Now, the kingdom is looking to expand - except in the rumored holy city of Alamut, which is rumored to be making weapons for Persia's would-be enemies. While Sharaman's natural born sons Tus (Richard Coyle) and Garsiv (Toby Kebbell) are hesitant, their uncle Nizam (Ben Kingsley) is steadfast in thinking they must attack.

Following Dastan's daring moves, all is seemingly well in the Persian kingdom ... That is until an unfortunate incident leaves Dastan running for his life. Now suspected of a major crime (to say more would spoil too much), Dastan is forced to flee the kingdom, his only "ally" (if you can call her one) being Princess Tamina (Gemma Arterton) of Alamut. The mysterious Tamina has only one thing on her mind, however: Protecting the dagger Dastan had taken a prize from Alamut in better days.

But that was then ... And this is now, with only one question remaining: Will Dastan be able to right the wrong, realize his destiny and become a true prince of ... Oh, you know!

THE TAKE: Let me say this up front: I know it's hard to imagine a movie inspired on a video game series that made its debut in 1989 (it was that long ago, fellow gamers!) could produce a good movie. Second, I know it's hard to see Jake Gyllenhaal as an action movie star and third, it has "I'll act in just about anything if the check is right regardless of quality" actor (Sir) Ben Kinsgley. (I know he's starred in acclaimed work, but he's also starred in stuff like BloodRayne (which was also based on a video game), A Sound of Thunder and The Love Guru recently, too.)

Well, guess what - none of those things matter: Prince of Persia: The Sands of Time is the first excellent movie of the 2010 summer movie season. And if you're looking for a film that delivers on adrenaline pumping action, humor, well-crafted chracters and overall entertainment value, this is it.

Gyllenhaal has always been one of those guys who has always just seemed out of place to me - until now. He does an excellent job at providing Dastan the right mix of charm, fortitude, mental and physical strength to make the character more than just a 'I'm always going to have a great one liner, then go into teeth-gritting action hero mode' standard. Likewise, Arterton provides a great presence opposite Gyllenhaal, never playing the too smart for a man card nor the too stupid, "please save me" role, either. Instead, she acts as someone in her position should, which helps make the situation feel real (or as real as possible given the situation) while moving the story forward at all turns.

Likewise, Kingsley and the rest of the film's supporting cast do the one thing that many action movie casts fail to do: Treat the situation as real as possible, akin to a drama instead of falling victim to the trappings of acting like characters in a ridiculous situation that ends up making the film too ridiculous for the audience. (I'm looking at YOU, Transformers and Transformers: Revenge of the Fallen!)

Likewise, Newell keeps the story moving without revealing too much of anything before you need to see it, helping to add to the film's intrigue, pacing and action level. While the special effects are nothing special (at least it's not in 3D!), they are capable - and that helps add to the experience.

While the film will likely come off as a strong B+ for the casual fan, those who like a truly entertaining, well-paced and thought out fantasy film will find Prince of Persia: The Sands of Time to be a rare gem in an early summer batch of cubic zirconias.