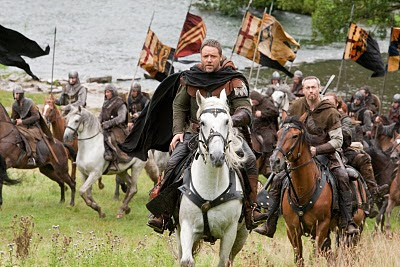 Who do you think you are, Braveheart or something?! Robin Longstride (Rusell Crowe) and Little John (Kevin Durand) prepare to wage some serious warfare in Ridley Scott's take on the legend of ROBIN HOOD.
Credit: Kerry Brown / Universal Pictures

THE PLOT: Set in 13th Century England at a time when war is prevalent, Ridley Scott's take on Robin Hood stars Russell Crowe as Robin Longstride, a common archer in the army of King Richard I (a.k.a. the Lionheart). Orphaned as a child, Robin - along with fellow soldiers Will Scarlet (Scott Grimes), Little John (Kevin Durand) and Allan A'Dayle (Alan Doyle) - is a simple man, only worried about self-preservation and returning home to England.

That all changes, however, when Richard is killed in battle along with Sir Robin Loxley (Douglas Hodge), the latter of whom is killed by Godfrey (Mark Strong) - a British born soldier who just so happens to be in cahoots with King Phillip of France (Jonathan Zaccaï). Honoring Loxley's request to return his sword home, Robin and his fellow soldiers travel by themselves to Nottingham - which is where he meets Sir Walter Loxley (Max Von Sydow, Robin's now-widowed wife, the independent and strong-willed Lady Marian (Cate Blanchett) and Friar Tuck (Mary Addy), the latter of which never met a good barrel of mead he didn't like.

But while King Phillip is busy at work planning England's demise, Nottingham and the rest of the country may soon be facing a far more sinister threat at home - the new king, the former Prince John (Oscar Isaac). For while he loves is new bride Isabella of Angoulême (Léa Seydoux), there is something Prince John loves even more than her: Power. And he will not let anyone - not his trusted chancellor William Marshall (William Hurt), his mother Eleanor of Aquitaine (Eileen Atkins) - come between what he thinks is his rightfully by God's will.

THE TAKE: There are a couple of things you need to know heading into the theater should you decide to see the latest take on Robin Hood: [1] This is NOT the Robin Hood you're used to - Robin Longstride isn't Robin of Loxley. Whereas one is a suave, smooth, James Bond in the Sean Connery-era type of individual, the other is a rugged, simple man of simple pleasures who prefers logic to flash and flare. The revised vision of Robin Hood may be a difficult one to get used to at first, which in turn will likely color the way you view the film.

The other three factors that might affect the way in which you view the film could be graded on an accelerating scale of "minute, minor and major." The minute problem is the fact that Oscar Isaac is annoying. Like, REALLY annoying. For while his character is not intended to be a good guy, Isaac's portrayal of him is almost akin to what would happen if someone who had a little bit of success abroad came back to town to work with their community theater company. It's too cartoony - and that hurts more often than it helps.

Moving on, the minor problem is the film's length/pacing - clocking in at over 2 hours, the film could easily be shortened by 30 minutes without losing much (if anything) of the overall story. As movies have continued the trend of running longer in recent years, some films have not figured out they don't have to continue to do so just to keep up with the Joneses (and not the recent movie of the same name no one apparently saw).

And that minor problem turns sets up the major problem - in telling/examining all of the events leading to what created "Robin Hood," Robin Hood the film isn't really about Crowe's character as much as it is establishing why the legend exists. That in turn makes the film more about the crown, Lady (don't you call me a maid!) Marian and the idea of doing the right thing and destiny more than Robin Hood himself. By the time you start to get a feel for the film, a lot of time has already passed, much of which is more informative than it is entertaining.

To put it in archer's terms, Robin Hood hits it target but never, ever strikes a bullseye when it tries to focus its aim.