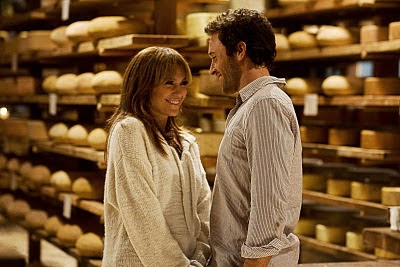 They're standing in a room full of cheese - Hmm ... How fitting considering how bad this movie is ... Zoe (Jennifer Lopez) stares deep into the eyes of Stan (Alex O'Loughlin) in CBS Film' new romantic comedy THE BACK-UP PLAN.
Credit: © CBS Films, Inc. All Rights Reserved.

THE PLOT: Set in New York City (because 90 percent of movies have to be set in either L.A. or New York apparently), The Back-Up Plan stars Jennifer Lopez (you remember Jenny from the block, don't you?) as Zoe, a successful pet shop owner (where her younger co-workers played by Noreen DeWulf and Eric Christian Olsen do whatever it is they do) with one little problem: She wants a baby NOW and doesn't want to have to wait on a husband to get one.

So, being a woman of action with a plan (hence the title), Zoe decides to head to a specialist (played by Robert Klein) to get inseminated even though she's not sure it will take. Attempting to catch a cab after leaving the clinic, she literally bumps into Stan (Alex O'Loughlin) attempting to do the same thing. Skip ahead and Zoe and Stan are getting along famously ... Until Zoe gets a piece of news via her pet dog Nutsy - who gets MORE than its fair share of screen time - that looks to complicate things with Stan.

THE TAKE: Ladies, I'm not going to pull any punches with you about The Back-Up Plan, a.k.a. the bad romantic comedy Kate Hudson and Jennifer Aniston apparently didn't have time to make. There are literally - LITERALLY! - only three reasons to drag this man to your film (perish the thought of you and a friend going to see this yourselves with hope in your hearts of it being worthwhile): [1] You enjoy arguments [2] You feel compelled to make him suffer for some horrible crime perpetrated against your person and/or [3] You really, really want to break up with him but need a reason for him to do the breaking up so you don't fill bad about breaking his heart if you said what you've been wanting to for days/weeks/months/years.

Now before you say 'Wait a minute, Tabari, if that is your real name - You don't get it. This is a not a guy's movie, this is a movie for women." First, I take offense to that as I, despite my prejudices going into a film whatever they may be, give every film a chance to surprise me, sometimes pleasantly as in the case of The Diving Bell and the Butterfly (a wonderful French/American biopic/drama I highly recommend seeing at least once in your lifetime. Second, anticipating your skepticism, I was sure to bring - or as it turned out, drag - along a female friend who enjoys traditional "girlie" things ... And she could not wait to escape the theater and return to life as she previously knew it before she wasted 90-plus minutes watching The Back-Up Plan.

Why is it so insufferable, you ask? LLet's see - there's plenty of easy things one can pick apart such as the repeatedly bad attempts at humor (there are maybe three genuine laughs in the film, tops, four if you count an EXTENDED birthing scene that goes where Knocked Up did a few years ago). How about the non-compelling performances of the supporting cast, save for Anthony Anderson as Stan's would-be relationship/parenting mentor, Klein as the most-leveled headed person in the whole film doing his best with tired material (and that's a compliment to Klein) and Watkins occasional stab as the sarcastic best friend (which she does well at times and not-so-much at others). The younger, hipper characters of Olsen and DeWulf don't add much to the affair other than a pair of pretty faces.

The major problem, however, is the one that pains me most - Lopez. I know many people hate on her singing (which I admittedly don't mind so much); The Back-Up Plan, however, does her no favors in terms of acting creditability. I mean, her portrayal of Zoe is so downright silly at times that it's impossible to feel anything - distaste, sympathy, empathy, etc. - real for her character. She never transcends Zoe from "movie character" to "person." O'Loughlin - who proves that a good six-pack can get you a leading role - only fares slightly better as he at least makes you feel something (whatever that may be may vary by person) for the haphazard Stan who is at times too smart for his character and too dumb at others for what he is supposed to be based upon the circumstances in which we first meet him.

Of course, Poul's "here comes the joke/drama" camera-work, which doesn't do anything for Angelo's paint-by-numbers, sappy happy script do the leads no favors, either. The characters relationship feels artificial, as do 99 percent of the events that lead them to every twist and turn in their relationship, almost like you're watching a movie about a romantic comedy than a romantic comedy itself.

The film has a "been there, seen this" vibe to it from the opening scene and fails to provide any compelling (there's that word again!) reason to invest in it, financially or emotionally. In other words, unless you are the type that needs no brain stimulation as long as there's a happy ending, this might be a film that's best to skip or watch on DVD when you're up for a bad movie night by yourself.

The film's lead characters finally fall for each other in a room full of cheese (see the picture above) - and that is much more telling of the film's quality factor than I'm sure its cast and crew intended. Those reasons will make The Back-Up Plan cause you to look for an escape plan ASAP. If Nutsy were really man's best friend, he would tell you to.