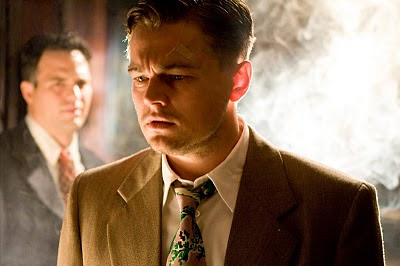 Who's there? Am I here? What's going on? Should I be concerned I'm dying of second hand smoke? Teddy Daniels (Leonardo DiCaprio, right) finds himself asking a lot of questions while his partner Chuck Aule (Mark Ruffalo, left) often stands off to the side in Martin Scorsese's new thriller SHUTTER ISLAND.
Credit: Paramount Pictures

THE PLOT: Based on the novel by Denis Lehane and directed by Hollywood Legend Martin Scorsese, Shutter Island stars Leonardo DiCaprio as Teddy Daniels, a U.S. federal marshall investigating the disappearance of Rachel (Emily Mortimer), a patient at the ertswhile mental facility for the criminally insane located in the Boston Harbor. Joined by his new partner Chuck Aule (Mark Ruffalo) - whom he's never met before riding in on a ferry to the island - Teddy quickly finds that conducting an investigation into Rachel's appearance is not going to be as easy as he would hope given the reluctance of the staff - led by Dr. Cawley (Ben Kingsley) and his partner Dr. Naehring (Max von Sydow) - to cooperate.

But when he finds a note asking a rather note in Rachel's cell asking a rather cryptic question - "Who is 67?" (the facility only claims to have 66 "patients") - Teddy begins to uncover a situation wilder than he ever anticipated. And for a man dealing with his own personal tragedy given the unexpected death of his wife (Michelle Williams) in a fire, Teddy may soon come to find Shutter Island a home away from home of his own ...

THE TAKE: If you paid attention to the previous sentence (or have read Lehane's book, which I have and will not), you might have noticed what many people in the biz call "foreshadowing." If you hate it when people foreshadow what's about to happen, then Shutter Island is not for you.

For despite not having read Lehane's book, I did not know the ending to the film going into it ... That did not stop me nor my friend, however, from figuring out the movie's true story an hour into the 2 hour, 30 minute-plus film. Nor did that prevent me from sitting through a performance by DiCaprio that might be best described as "awkward," an excessive use of blood by Scorsese that seems more gratuitous than necessary to tell the story, an understated (but a bit cheesy) performance by Ruffalo that still comes off more like a stereotypical-50s style detective than anything else - all of which leads to a film that feels like a haphazard attempt to achieve Cape Fear like psychological-thrills coupled with The Departed-level success.

The film loses steam as a thriller half way through as the clues begin to reveal too much too soon. DiCaprio - despite his attempts otherwise - fails to provide a compelling interest in his character and the dramatic hands Scorsese uses (from the abuse of mood music to jump cuts from one locale to the next and one scene to the next) fail to build up true suspense. Which is a shame.

Because Shutter Island should be good for more than a cheap thrill every 20 minutes or so.