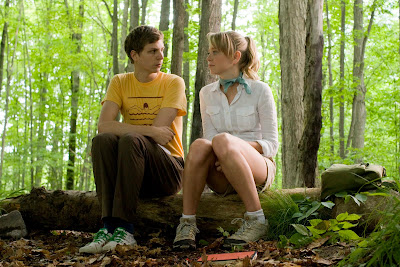 He's sensitive, all day, all the time ... Nick Twisp (Michael Cera) tries to cuddle up to Sheeni Saunders (Portia Doubleday), the girl of his dreams who may soon inspire him soon to become a YOUTH IN REVOLT.
Credit: Bruce Birmelin / Dimension Films, 2009

WRITER: Gustin Nash as adapted from the book by Youth in Revolt: The Journals of Nick Twisp by C.D. Payne

THE PLOT: Inspired by (having not read his book, I don't feel comfortably enough to say "based!") the novel by C.D. Payne, Youth In Revolt stars Michael Cera as Nick Twisp, a 16 year-old who barely gets along with his mom Estelle (Jean Smart), who depends on his dad (Steve Buscemi) - when he's not busy playing around with his WAY too hot and young for his age girlfriend (Ari Graynor) to send child support for her primary income. Estelle has a boyfriend, Jerry (Zach Galifianakis), but he, for all intents and purposes, is useless. And when it comes to the ladies, Nick, like his fellow virgin/friend Lefty (Erik Knudsen), feels useless, too.

Jerry, however, does do one useful thing - he, out of necessity, takes Nick and Estelle up the road from Oakland to a trailer park resort getaway. For the trailer park is where Nick meets the alluring, intelligent Sheeni Saunders (Portia Doubleday).

But there's just one problem for Nick: Sheeni, who has been considering the advances of the well-to-do Trent (Jonathan Bradford Wright), has an ideal man in her mind that Nick is not capable of being ... But when Nick creates Francois (Cera, FINALLY not being Cera!), a sly, just-doesn't-give-a-expletive alter ego to help himself win the girl of his young dreams, things become extremely interesting - and property damaging - to say the least...

THE TAKE: If you know me at all in the real world, you know I have a bit of an issue with young Mr. Cera - that issue being that no matter what film he is in, be it the atrocious Year One, passable flicks like Nick and Norah's Infinite Playlist or his bigger hits like Juno and Superbad, is that he is essentially the same guy in every movie. His range seems to consist of young, sensitive soul who is inexplicably the object of some young girl's eye ... And that's EXACTLY what makes him perfect for the role of Nick Twisp.

What makes Revolt and Cera work in the role, however, is his performance as Nick's alter ego Francois, which is unlike anything Cera has ever played up to and including this point in his career.

Francois is, for lack of a better word, a bit of a bastard - and Cera plays him convincingly enough to make him effective yet entertaining. (Think Jim Carrey playing "Hank" in the under-appreciated gooffest that is Me, Myself & Irene - if you appreciated/liked that movie, then Youth in Revolt should be right up your alley.) Throw in the cast's willingness to go with the silliness that insues as a result of Francois' actions and the film, while by and all counts ludricrous, works.

The person, however, that really stands out in the film, though, is Doubleday. The young actress makes a striking impression as Sheeni, although the character does at times seem a bit like a more fun, less sarcastic version of Ellen Page's title role in Juno. Be that as it may, Doubleday turns in a commendable job that shows her screen presence, timing and sense of owning a character makes her a young actress to keep your eye on in the future.

If nothing else, Youth in Revolt serves up some laughs, some interesting characters and a chance for Cera to show there's more to him than that haircut and a thrift shop fashion sense.